The growth and commitment that led to the creation of UBE's manufacturing and support facility in Ann Arbor, Michigan, actually began back in 1978.

Subsequently, a branch office was established in Ann Arbor to service injection molding, die casting, and extrusion press machinery. Ann Arbor is a regional, high-tech center with a large skilled-labor pool available due to its proximity to the metropolitan Detroit area.

By 1992, the increase in production of automotive plastic components had accelerated UBE sales to a level that required an expansion of resources. The Michigan branch became an independent corporation, UBE Machinery Sales Inc. (UMS), and later that year UMS acquired its own facility to house sales and service offices and an extensive spare parts warehouse. In 1996, UMS became UBE Machinery Inc. (UMI). A new manufacturing facility was built in Ann Arbor to engineer, build, and support UBE machines.

Today, the common belief of UMI's sales, service, production specialists, and support staff is simple: the competitiveness, and ultimately the success, of our customers is enhanced by the quality and performance of the UBE production equipment they rely on. Thus, "Total Commitment to Our Customers" is our mandate. To sustain it, UBE is constantly improving existing plastic molding and metal casting technologies, as well as developing new technologies to meet the demands of an ever-changing manufacturing environment. 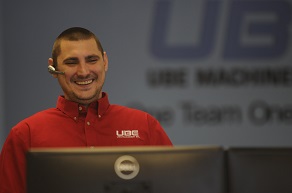